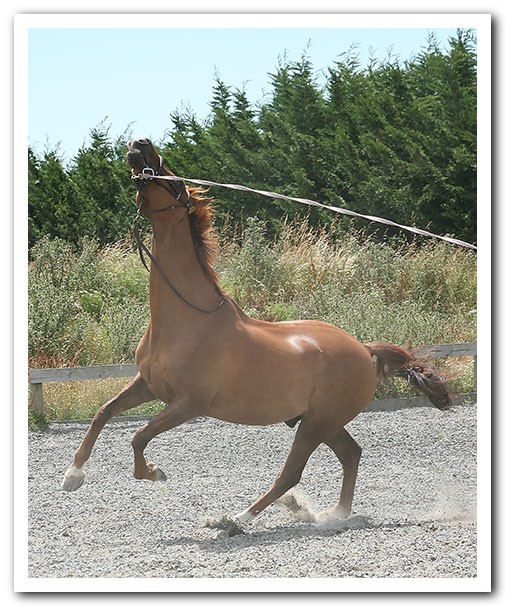 At Calm Healthy we rely on our FB page and posts as an important method of communicating with you.  From there you can contact me in the UK if you want to ask about specific issues so I can help you work out what you can do to improve the situation for your horse.   At Calm Healthy Horses we always consider the WHOLE diet and management, and in our experience working to get the right balance for the horse on a day to day basis is the only way to avoid problems.

Below is a FB post from early spring 2018 using it to demonstrate how using jigsaw pieces of information can limit our ability to get our heads around the problem.  picked the main themes from about 50 comments and provided our perspective on that information

Looking for advice! I bought an 12.2 lead- rein pony last autumn.  She was brilliant for the first few months, just a little jumpy in the wind. But now she’s become really spooky, to the point I daren’t put the little ones on her! Could it be the or just the fact she’s settled in? Her teeth have been checked. I’ve been lunging her and she is spooking on the roads when I long- rein her. Should I try magnesium? Any ideas would be very welcome – not sure what to do next!

Could be she is just trying to see what she can get away with or how far she can push you?

Ponies don’t start reacting badly to hassle and push their owners. There is a real problem according to the poster which is most likely diet-related.

Could be the grass but one of mine is super sensitive to alfalfa it makes him spooky and unmanageable to even lead from the field!

Alfa causes issues in the UK due to our cool season grasses bringing inappropriate levels of potassium and nitrates into the diet. Feeding Alfa further increases potassium,  adding fuel to the fire.  However, the ‘fire’ started with the GRASS.  Reduce access to grass and remove unsuitable feeds from the bucket.   The poster confirmed that the pony wasn’t getting any alfa or other inappropriate feedstuffs.

I would think it’s probably that she’s coming into and  I’d cut her feed down too.

In our experience coming into doesn’t create this problem when the well-managed and correctly balanced.  The poster confirms that they only feed a few haycobs in the bucket and the pony is muzzled when out on .  The poster is doing some good things but there is no salt or basic and mins in the ponies diet!

In our experience, ulcers are a product of diet and management rather than a thing on own.  By addressing the management, in this removal from grass, feeding ad lib horse hay and the complementary bucket with key , mins and salt, the digestive system and other systems can function as they should.

Mine is being lately, I would put it down to grass! Maybe do some lunging before riding and wait for the Spring flush to be over?

Although tongue-in-cheek, this comment isn’t very helpful.  Lunging a grass-affected pony does nothing to improve the situation.  Just waiting for the Spring flush to end could easily result in setting this pony up for laminitis.

Reading the post, you that the poster purchased a lead- rein pony in late Autumn/early Winter.  All was well EXCEPT that the pony was unsettled in the wind! Here is the first hint! By February, the pony is becoming dangerous for the children to ride, of an adult lunging and longlining it.  The pony is in at night with hay, given a token bucket that doesn’t add anything to balance the diet in terms of vitamins and minerals.  Grass management is in place using the muzzle and stabling but the pony is getting more and more unpredictable.   The original question was – will feeding magnesium

Only one of about 50 suggestions gave a useful indication of what was wrong and what needed to be done:

This time of year the grass is short on magnesium. Despite what a lot of people think, its not a calmer but an essential mineral for the smooth operation of at least 600 functions in the brain. One of the of magnesium deficiency in horses is – hence the Spring and Autumn behaviour that is blamed on grass growth. Try calcium and magnesium which is great for feet and fat pads too. If not deficient, she will get the runs.

This is helpful. But we would develop and add to the response. Here are our thoughts.

The amount of magnesium in the grass doesn’t vary that much depending on the time of year. So while it is true that magnesium levels increase over Summer, the level of increase is not that significant and is nothing in comparison to the varying levels of potassium.  We know from forage analysis that magnesium in hay is usually just about meeting basic magnesium for horses at rest or light work and so a basic vitamin and mineral supplement will always include some magnesium.

The commentator is absolutely right in pointing out that providing magnesium is not about ‘calming’ but about providing essential that your horse needs.  She is also correct to raise the importance of Calcium.  But this useful response only provides a bit of the information needed and the last part about “if they need it they will get the runs” strictly true.

So to clarify,  the level of potassium and nitrates in the grass when it’s in growth stage is the root cause of the issues.  The resulting imbalance puts stress on the nervous and other systems, further elevating the need for magnesium, calcium and other important the diet.

Having no regular vitamin and mineral supplement in the bucket puts the pony in a weaker position towards coping with the Spring grass, of the grass management that is in place. Lack of salt further compromises the pony’s ability to employ its natural resilience. I would guess, given the comment about “Brilliant except for the wind’, that the pony became compromised over the previous months and by February has become very grass- affected.  In addition to further improvements in the of the basic diet, additional supplementation of GrazeEzy and Alleviate C would be highly beneficial.

the poster did her homework and was able to work out why and then what her pony needs rather than using bits and pieces of information that don’t add up to a long term strategy for success.

One of the reasons I feel strongly about this is that I also had to use a jigsaw of when working out what was wrong with my horse in the past. Even though I had studied equine , it was only through Jenny and Calm Healthy Horses that the problem of potassium and nitrates became clear to me.  Before my horses became so Grass Affected that their health and performance were seriously affected, I also believed that more work and correct handling were the answer.

Right at the of my I can also remember buying a pot of magnesium oxide to add to the feed.  On its it did no good and my horse soon came down with full-blown laminitis.  I was also using a muzzle and keeping the horse in a stable at night with ad lib hay. Thankfully, and with Jenny’s help, I was able to broaden my knowledge and complete the jigsaw puzzle. I am now relieved to say that I can now prevent my horses suffering from grass affected issues.